U.S. Soccer Bans Headers in Children Under 10 Years of Age

Previous Next
U.S. Soccer Bans Headers in Children Under 10 Years of Age 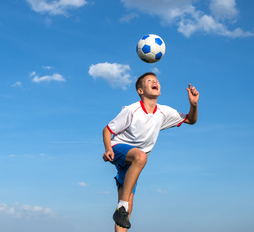 Gone are the days when “getting your bell rung” on the field was considered a badge of honor. Over the last few years more attention and awareness has been placed on head injuries and concussions in sports. While there is still much to be learned, the evidence is overwhelming that concussions need to be taken seriously. Depending on the severity of the trauma and time between concussions, head injuries can have devastating short-term effects as well as long-term repercussions affecting cognitive abilities.

With a rise in the incidence of concussions in youth sports, the spotlight is creating a need for more research, awareness, education and standards. Toward that end, a group of parents and players filed a lawsuit against a variety of soccer governing bodies seeking reforms due to the lack of action to provide better safety rules and regulations.

Once a satisfactory plan was reached, the Associated Press reported the U.S. Soccer Federation would ban “heading” among children 10 and under, limit it in practice for kids 11 to 13, and have medical professionals determine whether players suspected of having a concussion be allowed to remain in the game.

“This is a great first step,” said Michael McKindley, DPT of Progressive Physical Therapy and Rehabilitation in Costa Mesa. “We are treating kids much younger for concussions and it is becoming a health issue. Anything to help mitigate the inherent dangers of a sport and provide for a safer experience is very much welcomed. Additionally, I think parents these days are pushing kids at too young of an age to use their head and play when they do not feel 100%. When we see these kids, we also make sure to work with the parents and educate them about recognizing the signs of a concussion, safety measures and how to mitigate a head injury, when possible, along with the potential long-term health risks associated with concussions.”

Key elements of the initiative include:

More insight offered by a neurosurgeon

More insight into the issue with youth concussions was offered by Robert Cantu, professor of neurosurgery at the Boston University School of Medicine and published in Scientific American we he said, “We recommend that youngsters under the age of 14 not head the ball in soccer, not play tackle football and not full-body check in ice hockey. Impacts to the head are more damaging under that age, due to a number of structural and metabolic reasons.”

In addition to the initial statement a more comprehensive player safety campaign will be announced by U.S. Soccer in the next 30 days.