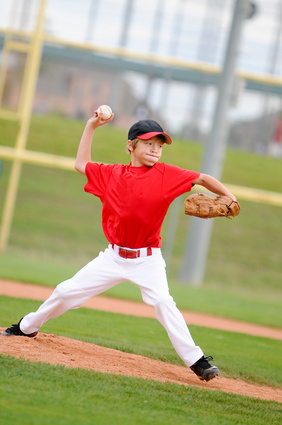 Young athletes pushing themselves to the breaking point

Bigger, stronger, faster is the mantra of many athletes, continually looking for that extra advantage. Playing through pain is considered a badge of honor. However, when it comes to youth sports and growing bodies, especially baseball pitchers, parents and coaches parents would be well advised to heed the advice of sports medicine professionals to not over train and be aware of overuse injuries that can be caused by repetitive motions. Most importantly, if pain does occur that is a sign to stop and rest.
With the pressure to succeed and possible college scholarships on the line adolescents are pushing themselves literally to the breaking point as evidenced by an increase in sports-related injuries to the musculoskeletal system with broken bones, sprains and strains and soft tissue damage.

University Medical Center in Chicago, at an American Orthopaedic Society for Sports Medicine meeting looked at this phenomenon, focusing on adolescent baseball pitchers in particular who are hard hit by these competitive pressures.

According to his research, young pitchers who are taller, throw harder and pitch for multiple teams are more likely to have a history of shoulder and elbow injuries than their peers. The study revealed that height, pitch velocity, and playing for more than one team correctly predicted 77 percent of injury histories for these at-risk athletes.  31% reported a pitching-related shoulder or elbow injury, which showed with a 10-inch increase in the pitcher’s height, a 10 mile-per-hour increase in pitch velocity and a pitcher who played for more than one team, the likelihood of injury increased 20%, 12% and 22%, respectively.

More adolescents being treated in office for overuse injuries

Over the last few years, Progressive Physical Therapy and Rehabilitation has seen an increase in elbow and shoulder injuries associated with adolescent and high school baseball players, in addition to a variety of bone, joint and soft tissue problems for all athletes in general.

“These kids end up with soft tissue, shoulder and elbow because they are not structurally developed to handle excessive pitches, especially if they are playing on more than one team,” said Michael McKindley, DPT, at Progressive Physical Therapy and Rehabilitation. “There is a reason baseball has instituted a pitch count. We spend a lot of time educating the kids and the parents on what pitch count really means and the different types of pitches, along with instructing them on proper body mechanics. Young kids should not be experiencing pain. It is not a work through the pain kind of problem. When they feel pain, they should stop, this is a warning sign. It is something we really try to stress to the coaches and parents.

“There are consequences to playing through pain and pitching too much,” McKindley added. “This applies to all sports, including soccer, basketball, football, tennis, lacrosse, rugby, and volleyball and not just to baseball. Kids who have not matured structurally and are working their way through puberty should not be working through pain.”

The fallout of these kids pitching harder and faster seems to manifest years down the road with what the American Sports Medicine Institute (ASMI) calls an epidemic of Tommy John surgeries that occur from a torn ulnar collateral ligament (UCL). According to an article published on Forbes.com in May 2014, they estimated there were an estimated 50 Tommy John surgeries for MLB players in 2013 and with an expected increase in the 2014 season with 45 such surgeries performed prior to the midway point of the year. These numbers are alarming considering there was, on average, fewer than16 such surgeries performed yearly between 2000-2011.

These stats were so alarming it resulted in the ASMI releasing a position statement to address the issue. In their statement the addressed the biggest injury risk factors for adolescent pitches: